Housing Bubble and Bust Was Widespread 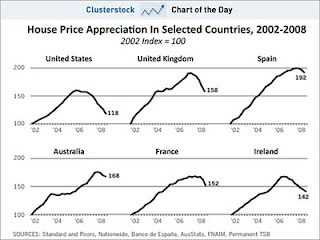 Allen Greenspan argued that the Fed was not responsible for housing bubble. He used charts like this that show that housing bubbles were widespread. This graph shows that he was correct in arguing that the US had lots of company. One thing that every country had in common was low interest rates. Otherwise, the banks did different things to create the bubbles. In the US, the securitization of mortgages and the use of credit default swaps (CDS) along with weak regulation and poor governance were involved in the crisis. This was also true in the UK. In Ireland, however, the major problem was a very close relationship between the major banks and real estate developers along with weak government regulation. Mortgages were not sucuritized and CDS's were not part of the problem in Ireland. In each of these countries, however, low interest rates, overly aggressive banking and weak government regulation were problems. Government could have done things to prevent the bubbles and the governance of the banks could have been better in each of these countries. The crisis was preventable.
Posted by Unknown at 4:08 PM