What Do We Learn From Home Depot's Investment Spending?

Home Depot is an economic bellwether.  Its income and profits track remarkably well to the business cycle.  The graph below shows the rise in profits prior to the housing market crash, and the rapid decline subsequent to the collapse in the housing market;  profits climbed steadily during the recovery and they are now back to where they were prior to the recession. The capital spending graph shows a very different pattern.  Capital spending fell off dramatically with the onset of the recession. It has been flat during the recovery and it is well below the peak it reached prior to the recession.  It has been able to restore its profits, but it is no longer investing its profits to expand.  Apparently, Home Depot does not envision growth in its future. 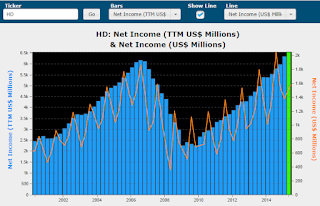 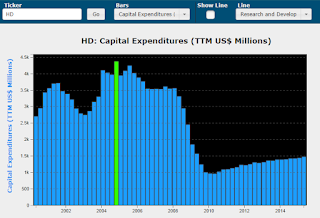