Paul Krugman read the transcripts of the Federal Reserve's deliberations in 2008 and was surprised that they did not recognize the scale of the housing bubble.  They could not believe that market prices could deviate so much from fundamentals.  It reminded him of a comment made by Bob Shiller that asset bubbles are natural Ponzi schemes.  That is they are not initiated by a schemer.  Prices begin to rise and more buyers are attracted to the market.  The bubble continues to inflate until no more buyers are able or willing to enter the market.  The bubble then bursts quickly as the number of sellers becomes greater than the number of buyers. The graph below illustrates the housing bubble. 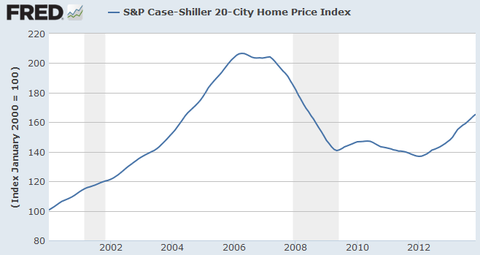 Bob Shiller had been raising flags about the housing bubble beginning in 2004 because housing prices deviated from fundamentals such as price to income levels, and price to rental revenues.  Shiller's critics accused him of "crying wolf" as prices continued to rise until the bubble eventually burst.  No more suckers were available to keep the Ponzi  scheme going.

There is a similar story about Joseph Kennedy's decision to sell his stock holdings just before the market crash in 1929.  He told his friends that he decided to sell when a shoe shine boy told him about a hot tip that he had received about a stock.  Kennedy concluded that if the shoe shine boy was buying stocks there were few suckers left to enter the market and keep the bubble inflating.  Kennedy understood asset bubbles better than most investors who were crushed by the collapse of the market.  He and Bob Shiller are a rare breed.  They understand that assets prices can deviate widely from market fundamentals.
Posted by Unknown at 8:45 AM