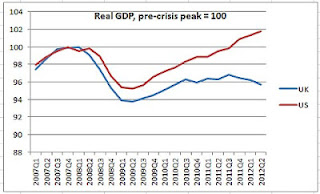 This graph (via Krugman) provides a good comparison between the US and UK recoveries.  The UK is suffering from a double dip recession and the US economy has had a modest recovery.  Austerity and the confidence fairy has not worked in the UK.  It has, however, increased the deficit to GDP ratio in the UK. This has given the conservative government an excuse to propose reforms to government programs.  The government is also outsourcing government programs to for-profit businesses. The broader goal of the conservative UK government is similar to that in the US.  The focus on austerity and budget deficits provides the rationale for channeling tax revenues to private concerns that have a relationship with the government.  Krugman used the graph to make the case for the use of Keynesian policies to stimulate the economy.  Conservatives have a better use for austerity.  Their constituents are not affected by the recession. They are very pleased with the way that things are going in the UK. Its all about the upwards distribution of wealth and income.