The Hockey Stick and Effort to Discredit It 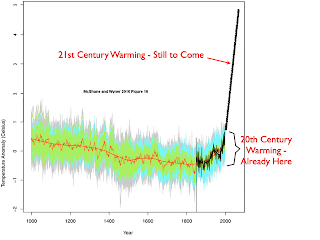 This is the famous hockey stick published by Michael Mann. It shows the rapid growth in global warming subsequent to the industrial revolution and the recent trend in warming which gains momentum and accelerates in the 21st century.

Joe Barton picked a good place to find problems with the hockey stick. The Mercatus Center has been a vocal critic of government regulation and 14 of George Bush's targets for deregulation came from Mercatus Center input. The economics department at GMU is also known for its conservative approach to economics.

Unfortunately, the work of the Mercatus Center and other organizations with connections to the fossil fuel industry, has accomplished its goal. Global warming deniers in the Tea Party, and in other conservative organizations, have been given enough ammunition to make the overwhelming consensus in the scientific community on the human contribution to global warming to appear to be a subject of intense debate and uncertainty among scientists.

Tom DeLay, the former GOP majority leader in the House, who was recently convicted in Texas for money laundering, was often called the representative from Enron. Joe Barton, like many politicians from Texas, understands how his bread is buttered.
Posted by Unknown at 11:40 AM