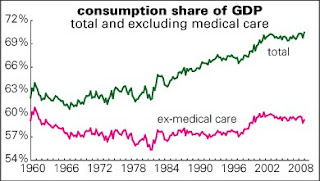 We have been looking at the federal budget deficit and the implication of health care costs (which means higher prices from suppliers) on the national debt in the long-term. We have also been discussing the health care reform bill and the reasons why there has not been as much support for health care reform. One of the problems is that a lot of people receive insurance benefits from their employers and they do not believe that reform will serve their interests. They think it primarily benefits the poor who do not have employer provided insurance. This graph should cause all of us to think twice about the need for reform. It shows that spending by households, less spending on health care, has been pretty flat since 1960 while consumption as a percent of GDP has risen dramatically, especially since the 80's. As a nation, we are spending an increasing amount of our income on health care because prices have been rising twice as fast as GDP (or income). Lets consider why this is a problem.

In the first place, the rising costs are a burden to employers who have been providing the insurance. This makes those who compete in global markets less competitive against firms in countries with less expensive health care and in countries in which the cost is borne by the government. This is one of the reasons why multi-nationals have moved much of their production off-shore. Furthermore, the trend has been to pass more of the cost of insurance on to employees. This is done by purchasing coverage with higher deductibles and co-payments but it has also been done by capping employer contribution to the cost and shifting the burden of price increases to employees. If health care prices continue to rise at twice the rate of income we will all be forced to spend an increasing share of our income on health care.

During the debate on health care reform the GOP scared lots of people by claiming that the bill was designed to ration health care. A lot of folks on Medicare believed the "granny scare" tactic employed by the GOP and its media outlets. What people don't understand is that pricing is a form of rationing. Many of us would like live in a million dollar house and drive an expensive luxury car. Most of us cannot do so because the high prices ration these luxuries for those on moderate incomes. Health care works the same. As prices rise it becomes less affordable and it is rationed by the pricing system. The GOP approach to health care reform is to let prices do the rationing. They are not interested in limiting price inflation. They would rather collect campaign contributions from the health care providers by" keeping government off of their backs".
Posted by Unknown at 7:11 AM