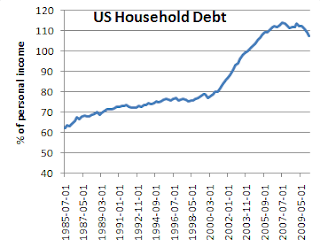 This graph shows the enormous rise in US household debt, with the most rapid increase beginning in the early 2000's with development of the housing bubble. Household debt was 60% of income as recently as 1985. It increased rapidly during the housing bubble to almost double the 1985 percentage by 2007.

Ordinarily, economic growth is a response to rising average household income. Since average income growth has been flat, our economy was driven by debt which is unsustainable. Households have begun to pay down their debt and they are saving more. This is one of the reasons for a slowly growing economy. The American consumer is no longer driving the US economy and the US is no longer the consumer of last resort for the world economy. This has created problems for countries dependent upon the US consumer. One of the consequences of slower growth in the world economy is that savings are flowing from slow growth economies to more rapidly growing economies. This creates inflation problems in those countries and it causes them to take actions to keep their currencies from rising in relation to the dollar. Another problem is that investors have become risk averse. They have been purchasing safer assets instead of investing in productivity enhancing assets that might provide the basis for future economic growth. The world economy has not only depended upon the US consumer. It has always looked for the US to provide leadership. This has not been forthcoming.

In order for the US government to lead the world economy it must have the support of the American people. One of the results of the US financial crisis, and the government's response, has been a loss of trust in government. This is reflected in the Tea Party movement, but is also evident among liberals. Too many Americans viewed our response to the financial crisis as an indication that government no longer serves the average American. It will take a long time, and it will take actions instead of words, to convince Americans that the government is on their side.
Posted by Unknown at 9:33 AM