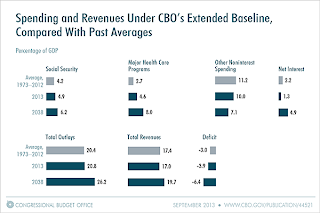 This graph from the latest CBO Budget report does a nice job of describing US spending and revenues through 2038.  Budget deficits between 1973 and 2013 have averaged around 3.5%.  Despite claims that federal spending has been out of control the real picture is one of stable federal spending in relation to revenue.

The budget deficit projected for 2038 shows an increase in the deficit to 6.4%.  The increase is entirely due to spending on Social Security and Healthcare.  There is decline in other federal spending between 2013 and 2038.  Net interest also increases as a share of spending due to the higher budget deficits and rising national debt.

In conclusion, we need to focus our attention on containing healthcare price inflation and make some tweaks to Social Security.  Everything else is noise.