US Senate Votes To Limit The Use Of The Filibuster

It requires a super-majority in the Senate to stop a filibuster.  About half of all the filibusters in the history of the Senate have occurred during the Obama Administration.  The GOP has used the filibuster to block votes on presidential cabinet nominees and federal judges.  In essence the GOP has used Senate rules to limit the ability of the executive branch to function during the Obama Administration.  The filibuster can still be used to block legislation and to block Supreme Court nominees.  The action by the Senate will enable elected presidents to run the executive branch without undue interference from the party that lost the presidential election.  It is a victory for whatever remains of our democracy.

The graph below shows how the frequency of the filibuster increased in recent years.  It was infrequently used before 1970.  It peaked during the Obama Administration by a wide margin. 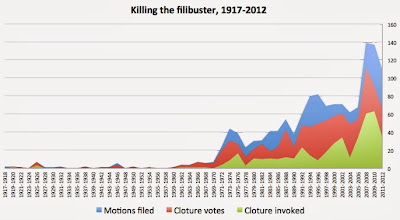