Is This A Picture Of Runaway Government Spending? 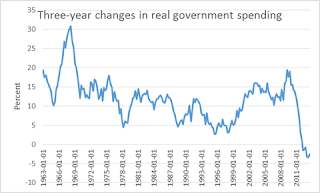 Paul Krugman posted this graph to make an important point.  Total government spending which includes state and local government has been in a sharp decline for the last three years.  It is part of the reason for a slow recovery, but it also suggests that governments are not investing as much as required on infrastructure, education, R&D etc.  Unfortunately, the graph tells a story that is the opposite of what most people believe.  They have been told repeatedly by the usual suspects that excessive government spending is a major problem.