In his Presidential Address at the 1938 meeting of the American Economic Association, Alvin Hanson coined the "secular stagnation" term that has been recently revived by Larry Summers.  Tim Taylor summarized the Hanson speech in this article.  Hanson described many of the factors which stimulate economic growth but he highlighted the key role that is played by business investment.  He argued that business investment is driven primarily by the expectation of profit opportunities.  Low interest rates are not a sufficient motivator of business investment.  Moreover, the expectation of high profits is greatest when new industries are formed.  In turn, these are often dependent upon developments in science and technology.  Hanson's prediction of secular stagnation was based upon the assumption that new industries were not forthcoming.

It turns out that Hanson was mistaken about the development of new industries.  For example, the auto industry led to a dramatic rise in economic development.  The sale of automobiles stimulated growth in the rubber and steel industry.  It also led to huge investments in roads and related infrastructure.  Hanson was correct, however, in his understanding of the critical role that business investment plays as a factor in economic growth.  It is the most volatile component of GDP and the slow recovery from recession in the US is related to a weak recovery in business investment.  The graph below, taken from Tim Taylor's article, helps to illustrate the relationship between business investment and economic growth. 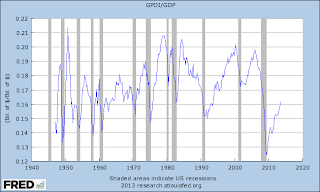 It is very clear from this graph, that business investment is very volatile and that it drops rapidly during recessions.  Growth in business investment also triggers recoveries from recession.  Business investment declined during the 1980's and it drove the recovery during the dotcom boom in the 1990's.  The recovery from the 2001 recession was driven by the real estate boom (new residential construction is included under business investment).  The decline in business investment during the Great Recession was greater than that in any of our recent recent recessions.  Business investment recovered more slowly in our current recovery than it has in past recoveries.  It is still well below previous peaks.  This raises the question about secular stagnation.  Where are the new opportunities for expected profits that will drive business investment?  Interest rates are very low but they are a passive force in driving business investment (with the exception of housing).  Large corporations in the US are sitting on a large accumulation of retained earnings but they apparently do not see many opportunities for investment in the US.  We are still waiting for developments in science and technology that will provide the incentive for investment.  The focus in Congress is also less than helpful. Congress seems to be more concerned about cutting federal spending than it is about investing in science and technology which leads to the development of new industries.  Moreover, the cutbacks in total government spending have contributed to the slow growth in GDP.  We are currently dependent upon household consumption which is limited by the accumulation of household debt during the real estate boom.  We can anticipate slow economic growth in the near future.  The question is whether something will happen to stimulate business investment.