The Rise Of Market Fundamentalism In US Is A Republican Thing

Daniel Little compared the change in public opinion about market fundamentalism in the US with the change in Sweden.  Public opinion in the US about the role of government in providing basic support for the needy has been relatively constant among Democrats.  However, it has declined dramatically for those who identify themselves as Republicans.  Public opinion in the US has become polarized.  The gap between Democrats and Republicans on social policy issues has increased enormously since the 1980's.  The widening of the gap is almost totally the result of changing attitudes among Republicans.  The gap widened most significantly on the attitude towards public debt.  Republicans and Independents have become less supportive of public debt.  That explains why the GOP has focused so much attention on the growth in public debt.  Its base does not want to pay taxes to fund social programs that the GOP has identified as the major factor in the rise of public debt.  The public debt issue has also been effective among independents.  Their concerns about the rise in public debt has also grown over time.  This result is illustrated in the following graph (click to enlarge).  It makes sense for the GOP to build its campaign strategy on amplifying the attitudes that exist within the GOP base, and by justifying the attitude change by an appeal to fiscal responsibility. This also helps them to win support among independents who have grown more concerned about public debt. 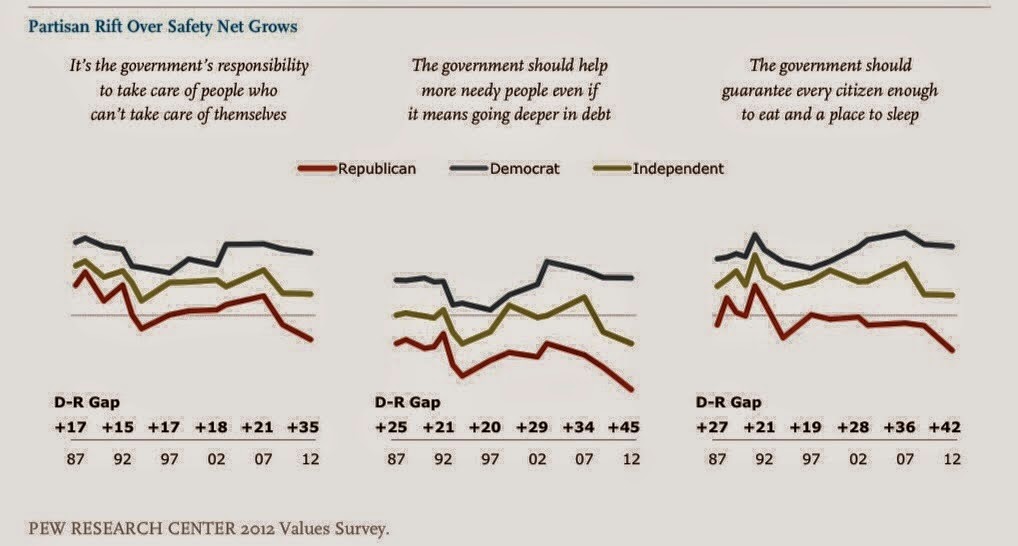 Daniel Little found that support for public programs that benefit the less affluent has increased in Sweden over the same time period.  Public support for social diversity has also increased in Sweden despite the growth in immigration.  The forces that shape public opinion in Sweden and the US must be very different.  The Republican Party in the US has its own news network, and the owner of that network also owns the Wall Street Journal.  They get a lot of ideological support from the plethora of GOP think tanks that are funded by wealthy ideologues.  Their contributions to these organizations are generally tax deductible.
Posted by Unknown at 4:57 AM