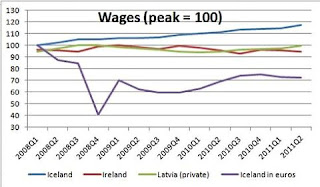 Neo-classical theorists argue that recessions will lower wages and cause employers to hire the unemployed and put an end to the recession. This argument is being used in Europe to justify the use of fiscal austerity by governments to deal with the financial crisis. Austerity will lead to unemployment which will cause wages to fall and make at risk countries like Ireland more competitive in international markets. Rising exports will eventually improve their fiscal position.

This graph (via Paul Krugman) shows that wages tend to be sticky. Wages have not fallen in Ireland, Latvia and Iceland following recession and high levels of unemployment. Its easier for employers to cut the workforce than it is to reduce wages and destroy the morale of retained employees. On the other hand, Iceland's wages have fallen dramatically when measured in the euro. Its currency depreciated relative to the euro and this has made Iceland's products more competitive on international markets. Countries in the eurozone are not able to depreciate the common currency and become more competitive quickly as Iceland has done. It will take a long time for austerity to work its way through in the at risk countries in the eurozone. It will be very difficult for them to become more competitive in international markets and restore their economies.
Posted by Unknown at 5:30 AM