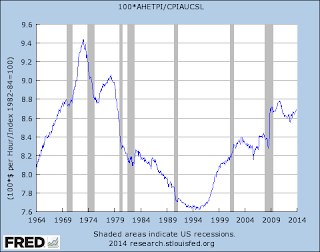 There has been a lot of debate about raising the minimum wage in the US.  This graph (via Paul Krugman) depicts the changes in the average real hourly wage since 1964.  The period between 1964 and 1973 was a period of rapid wage growth.  The real hourly wage hit its peak of $9.4 in 1973.  It dropped rapidly to a trough in 1994 when it hit bottom at $7.6.  It rose during the dotcom boom in the Clinton era to $8.4 and it is currently at $8.6.  Hourly workers were much better off in 1973 than they are today.  During this period the economy has grown substantially but economic growth has not benefited the wages of hourly workers.  Curiously, the fastest growth in wages were occurred during the 60's and early 70's which was a period of social unrest.  The Reagan era in the 80's, which is reputed to have been favorable for economic growth, was not good for hourly wages.  The upward trend in the Clinton era was a period of very low unemployment.  Wage growth is usually better when the demand for labor is greater than the supply.  There are no indications that the real hourly wage will continue to head upwards under current conditions.  Moreover, there is no indication that Congress will agree to increase the minimum wage that has been requested by the Obama Administration.