Republican Lies About The Estate Tax

The Republican Party has consistently attempted to eliminate the estate tax.  They claim that the estate tax, which they call the death tax, steals money away from small business owners and small farmers.  Their supporters don't know enough about tax policy to understand that this is a big lie.  Only 50 small business owners and small farmers are affected by the estate tax because it only affects the very large estates that are primarily owned by their major donors. There is a $10 million exemption for a married couple.  They would would only pay a tax on assets above the exemption.
The image below shows the real impact of the estate tax on small farmers and small businesses.  Republicans depend upon the ignorance of their base to win elections.  They always claim that they are protecting the interests of ordinary citizens when they propose policies that benefit the super rich.  They get away with false populism because their base is systematically misinformed.  Donald Trump won the presidency by pretending to be a populist.  He still plays that game even though his cabinet appointees are among the super rich. Most the tax "reforms" under discussion in the White House are designed to reduce taxes for the super rich.  That shifts the tax burden to the middle class and it requires the government to reduce spending in order to avoid budget deficits. Most of the spending cuts under consideration target social welfare programs that primarily benefit the populists that voted for Trump. 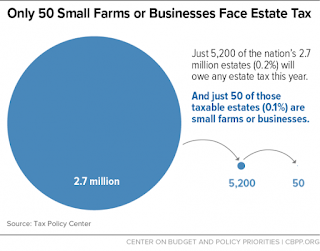