US Monthly Trade Deficits With and Without Petroleum 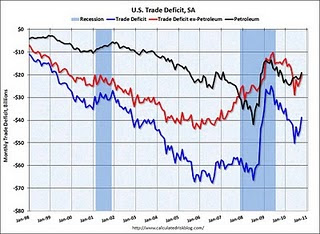 The US Trade Deficit at the end of 2010 will be around $470 billion. The trade deficit will negate most of the impact of additional government spending created to stimulate employment. The graph also shows that petroleum imports account for about half of our monthly trade deficit, which is around $40 billion. Reducing our dependency on imported oil would have a big impact on our trade deficit. It would also lower our federal budget deficits since national dissavings (which includes budget deficits) are equal to our trade deficit.

Our non-oil trade deficit could also be reduced if our multinational corporations reduced their offshoring of production. For example, we used to have a trade surplus in computer and communication technology products and now we have a large trade deficit because US based multinationals make their products overseas and import them for sale in the US and export them from offshore plants to international markets. Its unlikely that US based multinationals would do this on their own since their margins would be reduced by a small percent. It would take action by the US government to make it more expensive for them to import their products back into the US, but the government could also give them an incentive to export their products to international markets from the US. Many countries in Europe provide export incentives by eliminating the value added tax on exported products.
Posted by Unknown at 8:43 AM