Who Benefits From Entitlements And Tax Expenditures In US? 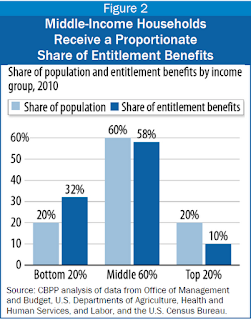 This graph (via Jared Bernstein) shows that there is some income redistribution in the US through entitlement programs.  The middle 60% of the population receives about an equal share of the benefits.  The bottom 20% gets 12% more of than an equal share, and the top 20% gets only 10% of the benefits.  There is some redistribution from entitlements, but it does not suggest that that 47% of US population consists of moochers. 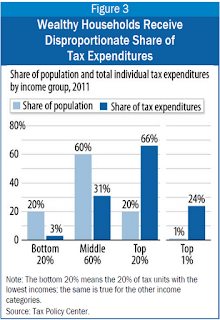 Jared Bernstein also published this graph that shows which income groups benefit from tax expenditures.  Tax expenditures represent tax dollars lost by government by a variety of deductions, exemptions and tax credits that reduce taxes.  The top 20% gets 66% of the tax expenditures while the bottom 80% only receives 34%.  The top 1% gets 24% of the tax expenditures or only 10% less than the amount that goes to the bottom 80% of income earners.  This goes a long way towards reducing the progressiveness of the income tax system.  That is why the effective tax rates of many billionaires is lower than the effective tax rates of most citizens.