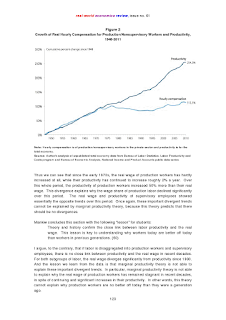 This graph (click to enlarge) shows that  the relationship between hourly wages and productivity, which is the output per hour of work, shifted sharply around 1980.  Real growth in hourly wages have been stagnant, while productivity has continued to increase on its trend line.  It is hard to explain this result in terms of marginal productivity theory.  Other factors must have led to this result. 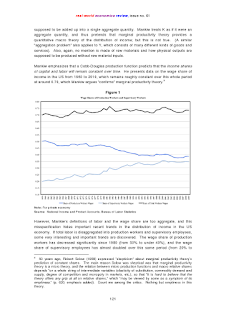 The top line on this graph shows that wages income has been relatively constant over time.  The second line shows that hourly wages have declined over that period.  The third line shows that wages going to supervisor's have risen during this period.  The gains from productivity have gone to managers, and executives instead of being shared with hourly workers.  It is easier to explain that phenomenon by factors other than the marginal productivity of labor. The wages of hourly workers have more likely been affected by weaker bargaining power.  The decline in bargaining power may be related to the decline in unions as well as to globalization and the threat of offshoring jobs to low wage countries.  Government policies have also been more favorably aligned with management concerns.  Anti-labor legislation, low minimum wage laws and a host of other factors have led to an imbalance of power that undermines wage growth for hourly workers.