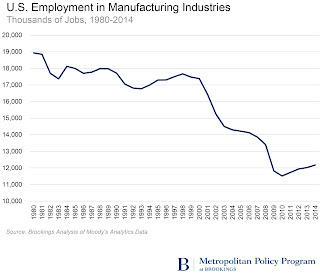 Brookings reports the conclusions of a team of economists on the effects of deindustrialization in the US.  The loss of manufacturing jobs, especially in the Rust Belt, is blamed for much of the discontent among working class Americans.  In a sense, we have become a consumption economy.  Consumers have access to a wider range of products at lower prices.  However, there has been a loss of labor income and wealth associated with deindustrialization.  The jobs that remain pay lower wages due to competition with workers in lower cost locations (including those moved to the South).  The loss of wealth in rust belt cities is visible to anyone.  The infrastructure that was developed to support more prosperous communities cannot be supported by a greatly reduced tax base.  The citizens that remain in wasted cities are forced to struggle with poor schools and access to necessities such as clean water in Flint.  It is not a pretty picture.