David Brooks and Neil Irwin published op-ed's in the NYT which tell different stories about income inequality in the US.  Neil Irwin approaches the story by examining the impact of a broad trend in corporate America.  For the last few decades corporations have operated by focusing on their core competencies and by using independent contractors to satisfy their non-core labor requirements.  He tells this story by comparing two janitors.  One janitor was a full time employee of Kodak many years ago and the other janitor works as a contractor for Apple.  David Brooks found a way to dismiss the problem of rising inequality by reporting that capitalism is working just like it is supposed to work.  Median household real income in 2015 grew by 5.2% and it grew by 3.2% in 2016.  That was faster than the growth in productivity combined with the inflation rate.  He dismisses the idea that we have an inequality problem.  Instead we have a productivity problem.  We should take steps to improve the growth in productivity instead of redistributed income.

David Brooks seems to be primarily worried about politics in the US.  Left wing Democrats, like Bernie Sanders,  want to deal with inequality by redistributed income.  Right wing populists under Donald Trump have focused on reducing immigration and trade agreements in order to reduce income inequality.  He argues hat we need a resurgence of moderate politicians who will take steps to improve productivity which is the real problem in our economy.  This is consistent with many of the recent op-eds that Brooks has published.  He has been making a case for moderation in our politics and in the way we think about complex issues.  We don't need radical ideas to deal with rising inequality if slow growth in productivity is the real issue.  In a way that gives Brooks something to write about since Trump became the leader of the Republican Party.  His career had been based upon supporting conservative Republican policies.  One of the economic  assumptions in conservative ideology is that there is a close relationship between worker productivity and compensation.  Executives and lower level employees get paid in accordance with their contribution to output.  Executive pay has been rising faster than non-executive pay because of faster growth in executive productivity (whatever that is).

Neil Irwin's story is less about economic ideas, such as productivity, which nobody really understands, and its relationship to compensation.  He also takes a long term look at changes in corporate management practices which have changed considerably over the last few decades.  Median household income increases over the last two years is less revealing about rising income inequality than the steady rise in income inequality over decades. 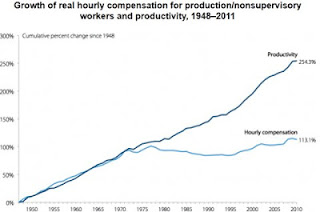 Irwin compares the careers of janitor at Kodak, and a janitor at Apple, to make his point about the new management theory and how it contributes to income inequality.  The janitor at Kodak was a full time employee of Kodak.  She received healthcare benefits, paid vacation and she participated in Kodak's pension plan.  She also had an opportunity take a training program that prepared her to advance to a better job within Kodak and eventually outside of Kodak.  This was not atypical. Major corporations considered all of their employees to be assets and they bragged about the size of their workforce.  The janitor at Apple is a contract employee who does not participate in Apple's healthcare plan, its retirement plan or other benefit programs that are provided to core employees.  Moreover, Apple is not likely to provide its contract employee an opportunity for a more senior position at Apple or elsewhere.  Social mobility is reduced along with employee compensation.  Overall, between 1989 and 2014 contract employees received 20% lower wages than full time employees of the hiring firm.

During Kodak's heyday, prior to digital photography, it employed enough middle class employees to create two generations of middle class families in Rochester, NY.  That changed after the move to digital photography and it shows in Rochester today.  It is no longer a wealthy city with a large and prosperous middle class.  On the other hand, Apple has not contributed to the development of a middle class in Cupertino.  Its core employees are highly paid and they have driven up housing prices in Cupertino.  The median home price in Cupertino is $1.9 million.  Apple's janitor cannot afford to live in Cupertino.  Apple and other high tech employers in Silicon Valley also require a smaller number of employees to generate revenue and profits.  Kodak, IBM and AT&T required three times the number of employees than the three tech giants in Silicon Valley to generate 27% less revenue.  That is because companies like Kodak had to produce an additional role of film to generate marginal revenue.  The tech companies can generate revenue without creating an additional product.  They prosper by getting new users to use their network services.  It doesn't cost Google anything to provide an additional click to an user which adds to its advertising revenue.

In summary, we don't know why real median household income increased in 2015 and 2016.  It could something simple like more full time work by household members in response to economic growth. It's certainly not time to ignore the decades long discrepancy between productivity growth and wage growth and conclude that the distribution of income is no longer a problem in the US.  Wages are determined by corporate management decisions.  Those decisions are consistent with the prevailing management philosophy that contracts out for non-core employees in order to decrease total compensation costs and improve profits.  Contract employees are treated as commodities which should be purchased at the lowest price.  Core employees are a critical resource that are well compensated and have opportunities for upward mobility.  The use of contract employees is not restricted to occupations like janitorial services.  For example, consulting companies, that provide information technology services to major corporations, are able to do much of their work by networking to places like India where the work can be done at lower cost.  IBM, which has a large services business, has close to same number of employees in India as it has in the US where its workforce has been shrinking for years.