The non-partisan Tax Policy Center  did an analysis of the tax plan that Trump is selling as a plan to benefit the middle class.  He also claimed that he would not benefit from the plan.  Most of the benefit from the tax cuts go to the top 1%.  It would also increase the federal debt by $2.4 trillion.  Paul Ryan loves this kind of plan and he will try to sell it Congress.  His plans typically include an assumption that the tax cuts will pay for themselves (Which is false) by growing the economy.  The huge increase in federal debt will not exist in his analysis.  It is assumed away by growth that will not happen. 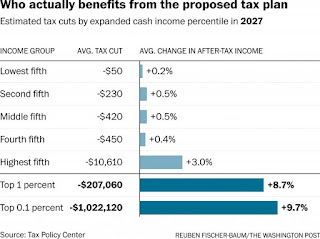