The Myth Of The Exploding Federal Government 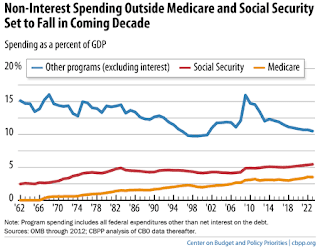 One of the most common myths that we hear from tea partiers, and their teachers at Fox News etc., is that the federal government is growing out of control.  The blue line shows non-interest spending by the federal government, excluding Medicare and Social Security,  in relation to the size of the economy.  It was at a peak of 15% of GDP in 1962 and it fell steadily to a low of 10% during the Clinton Administration.  It grew back to around 15% of GDP as a result of two recessions.  During recessions the economy shrinks and mandatory spending on unemployment programs etc. rise.  The peak occurred in 2009 at the onset of the Great Recession.  It has fallen steadily since the peak and it is projected to fall well below the long term average for federal spending as a share of GDP.

Social Security spending has increased steadily over this period. Its share of federal spending in relation to GDP doubled from 2.5% in 1962 to 5% at present and it will continue to grow slowly due to an aging population.

We introduced Medicare in the Johnson Administration and it has grown to about 2.5% of federal spending and it will continue to grow as our population ages and as the prices that we pay for healthcare services continue to rise.

In conclusion, we are not faced with a problem of out of control spending by the federal government.  The growth in federal spending has been driven primarily by Medicare spending.