The Myth of Exploding Federal Spending On Safety Net Programs 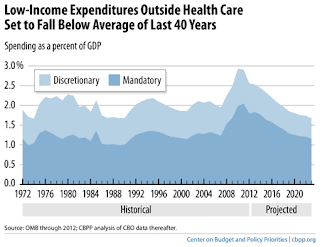 The other myth that is widely believed by a part of the public is that spending on social safety net programs for those with low incomes has exploded.  This graph shows that low income expenditures, excluding healthcare as a share of GDP, grew at the onset of the Great Recession, but they have been falling and will continue to fall over the next decade.  They are projected to be below the long term average at the end of the decade.  The popular myth that the federal government has created a society of "moochers"and that federal spending on the "moochers" will bankrupt the country is not supported by the data and by CBO projections of future spending.