Income Inequality Trends Europe Versus US 1900-2010 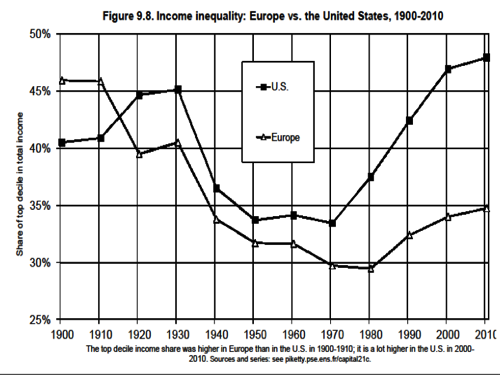 This graph is taken from Capital In The 21st Century by Thomas Piketty which has just been released in English.  The book is very well written.  It provides an historical look at income inequality over several hundred years in different parts of the world. Income inequality in Europe peaked in 1900.  It dropped dramatically as a result of WW1 and the Great Depression which destroyed capital and the income from capital.  Inequality trended upwards in Europe by 1980 but it is far below its peak in 1900.  Income inequality peaked in the US in 1929 and it declined due to the Great Depression and the shifts in the economy due to WW ll.  Income inequality in the US began to trend upwards in 1970 and it is now higher than its previous peak prior to the market crash in 1929.

Piketty's book describes the dynamic process that explains these shifts in income and wealth inequality over time.  It also offers a forecast about the future trends in income inequality and some of the consequences.  The book is rich in historical detail.  It does a good job of explaining  income growth, and the changing share of income between capital and labor over time.  He argues that income inequality is not due to imperfections in the market.  His data suggests that income inequality is positively related to that degree of market liberalization that exists in a country.  That would explain why the growth of income inequality in the US has been faster than that in Europe since 1980 when political policies in the US were influenced by an ethos of market liberalization.

Piketty's book is refreshing in many ways.  It is not only very informative, and filled with carefully analyzed data,  it also shifts the focus of economic research to the issue of distribution which was an important part of political economy before the attention of economists shifted to the production of mathematical models of an abstract economy that does not exist.
Posted by Unknown at 9:20 AM